What is App Store Optimization? 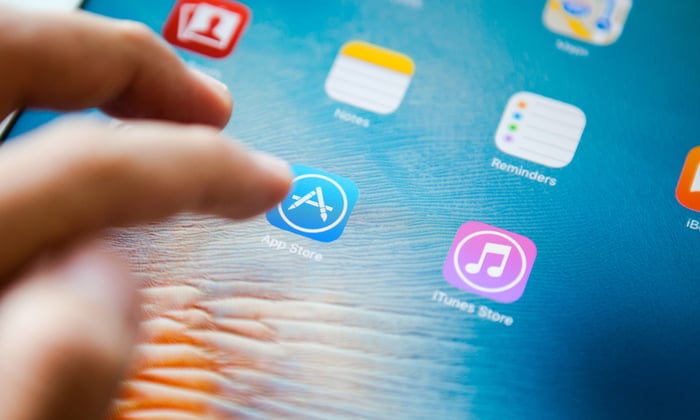 With over 4 million mobile apps in the major app stores, getting your app discovered is one of the biggest issues facing mobile app publishers today. This is why understanding app store optimization is so crucial.

But what is app store optimization, and how can you make the most of it? Here’s what you need to know to help your app rank well.

What is App Store Optimization (ASO)?

That increased visibility tends to translate into more traffic to your app’s page in the app store.

The goal of ASO is to drive more traffic to your app’s page in the app store, so searchers can take a specific action: download your app.

The ASO process also requires a crucial understanding of your target customer base, including the keywords your potential customers are using to find apps similar to yours.

When you learn more about which keywords are being used, you will better understand your potential customers’ language so you can hone in on the best keywords to use.

Why is ASO Important?

According to Forrester, 63% of apps are discovered through app store searches. This makes search in the app store the most used method for discovering and downloading new apps.

Recently, at Google I/O, Ankit Jain reported that “For the average app, search actually makes up the vast majority of installs.” Simply put, this means that:

If you’re not using ASO to increase your app’s search ranking, you’re missing out on the largest discovery channel available to your app.

With hundreds of thousands of apps in each app store vying to rank above one another, the amazing reality is that most publishers are not investing in app store optimization.

So here’s my gift to you: ASO is your secret weapon. Spend time every week improving your ASO, and you will meaningfully impact your app’s ranking and overall success.

How to Help Your App Rank: The Basics of ASO

Much of what I’m about to explain is going to be SEO basics.

If you’re already familiar with these for web searches, there are still a few key differences within the App Store.

Let’s start by breaking down the various components that can affect your ASO:

Besides being the most important ASO factor, the title and keywords can be modified easily to optimize them regularly.

Here’s a complete breakdown of all the factors to keep in mind when optimizing your app for better rankings.

The title is our first impression online. It’s what drew you to read this post, and it’s what will draw users to your app.

Optimizing with a keyword in the title increases search ranking for that title by 10.3%!

Obviously, some limitations apply, as the App Store is very regulated.

You’re given only 30 characters for a title in iOS 11, and keyword stuffing is a surefire way to risk being banned.

Think about it — would you rather have “Evernote” or “Note Taking Note App for Notes” on your smartphone?

Be smart about how you optimize.

Pandora, for example, does everything right.

Its icon is sleek and simple, and with a short name, it was able to fit in three essential keywords.

When searching the App Store for “free,” “music,” or “radio,” you’ll find Pandora at or near the top.

Here’s where things get a bit murky. Technically the App Store algorithm ignores the description.

Users, however, are a different story.

Rather than optimizing for SEO, focus on explaining the features and benefits of your product.

And, while it seems like you have a lot of space to do this, you actually don’t.

Truncated snippets are shown on your product page, and a few readers will ever click “more” to read beyond what you see here.

You have 252 characters to make your pitch and convince someone you’re worth downloading.

There’s no room for fluff, and you may need to A/B test several iterations to find what works best.

iOS 11 provides you with 100 characters to enter keywords separated by commas.

These help your app get discovered through search and related content.

There’s no need to duplicate efforts here, so choose keywords you haven’t already used in the title.

This feature is only available to iOS app developers and is an essential tool for listing any project.

You can also use a keyword research tool like Ubersuggest to find common key terms and test them.

You’re given a subtitle below the title in search results. This is also limited to 30 characters.

It gives you another chance to use more descriptive keywords. 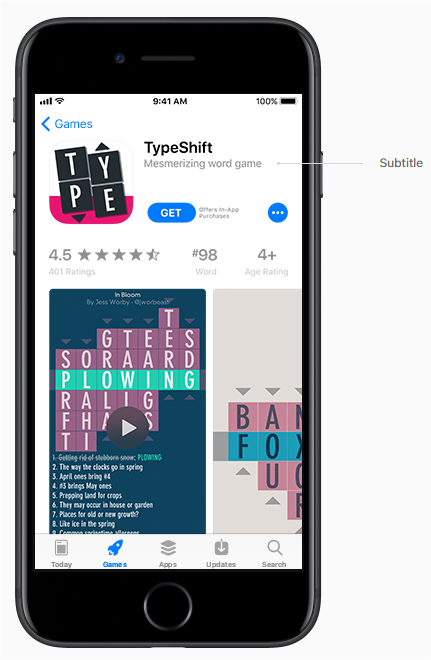 TypeShift, for example, uses the space to input its SEO.

This is a cleaner look and can work well.

I would’ve still taken the opportunity to use some keywords in the title, but that’s out of my control.

Which is a great segue to my next topic.

Customer reviews and ratings are an important consideration for users, especially those unfamiliar with an app brand.

Apps with higher ratings also ranked higher. This raises a tricky dilemma: you want more ratings and reviews, but not if they are negative. So, you need a way to connect with your customers inside your app, giving them a place to vent and talk directly to the developer.

On the flip side, you want to guide happy customers to leave positive reviews for you.

The average rating of the top 100 free apps in the App Store is 4 stars!

The lower your rating, the fewer consumers who will be willing to consider downloading it.

Think about it. When was the last time you downloaded a one-star app?

You may have rated an app one star, but it was likely rated 3 or more stars when you downloaded it.

Maintaining a high rating is often easier than raising one from 2 to 4 stars.

That’s why it’s important to solicit reviews from customers within the app.

One time is all that’s necessary, and it needs to be done within the first 72 hours.

That’s how long 77% of users will use an app before never again turning it on.

It’s also important to wait until after the customer has a chance to use the app.

Instead of basing it on a timer, consider a push notification when the customer completes certain actions.

Examples of great times to do this are after the first level of a game or after a customer sends their first message through your encrypted messaging app.

Try not to be too spammy, though, and keep in mind your app’s performance can affect its rating.

Ultimately, you want a page full of glowing reviews.

And don’t be shy about replying to negative reviews.

It’s possible a bad customer experience happened due to an error or glitch that’s since been corrected.

Thank users for their reviews whenever possible, good or bad, and correct issues brought up. This is your time to gather valuable user feedback.

This is your time to gather valuable user feedback.

Both the App and Google Play stores use the number of times an app has been downloaded to determine ranking.

For example, while an app may have 1 million overall downloads, a newer app can beat it by getting more downloads this month.

The preview video and images can be a major factor in this.

The majority of top apps in the App Store use app previews to increase customer conversions.

Once you have a user, however, you’ll need to keep them.

It’s harder than it sounds, and Apple is paying attention.

What can you do to get more downloads for your app?

Improving your ASO is a great place to start. Beyond that, work on marketing your brand and app to improve recognition, awareness, and appeal, from app store description to images, ratings/reviews, and social media presence.

The average app has only a 36% retention rate in the first month.

Further breaking things down, we can look at the retention rates by industry.

There are so many apps available in the App Store that users download plenty to never use them.

A study found Americans use an average of 30 apps each month out of the roughly 90 they have installed.

This means even if your app is downloaded, it’s unlikely it’ll ever be used beyond the first 72 hours.

How long your app stays installed and how many times it’s used while installed can help App Store search rankings.

Now that you understand how the search rankings work, it’s time to explore best practices for publishing an app to ensure it’s seen and downloaded.

Do Apps with Higher Ratings Rank Higher in Search Results?

This test was done by taking a random sampling of keywords and categorizing them by difficulty related to rankings.

An “easy” keyword results in fewer than 25 apps trying to rank for that keyword. “Medium” keywords are included in 25-100 apps, and “competitive” keywords are those in 100+ apps. 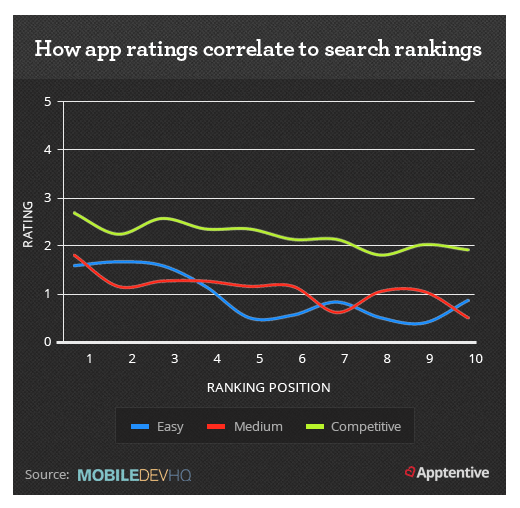 Based on this test, there is a clear trend showing that apps with higher ratings also rank higher for keyword difficulty.

(But don’t beg for them; earn better ratings for your apps the right way.)

ASO is a process that needs to be monitored and constantly tweaked over a period of time. Your optimal set of keywords rarely is the set that you first opt to put in the app store.

In most cases, little or no research on keyword searches occurs before the app submission, leaving most apps hidden, and the likelihood of discovery quite low.

To reap the rewards of ASO, you need to invest time and effort. If you do, you’ll have a consistent channel driving traffic to your app.

Being found is one of the most difficult challenges for mobile apps, but it is a problem you can actively solve with the tips above.

Have you found success with ASO? What has helped your app rank better?

The post What is App Store Optimization? appeared first on Neil Patel.