QR (Quick Response) codes remain a creative way to drive traffic and connect with your audience. But are they still useful in today’s ultra-digital era? Or have they gone the way of flip phones and pagers?

But, QR codes are not right for every company. However, several businesses have found innovative and unique ways to not only get you to scan their code but boost their brand awareness in the process.

Here are a few of the most memorable ones – and a few tips for putting this strategy to work for your brand.

Back in 2011, 14 million Americans scanned a QR code. But the novelty quickly wore off, with most marketers calling for the official Death of QR codes.

Why didn’t they catch on? Most smartphones required a third-party app to read them — adding another step to the already clunky process. Now, however, most smartphones have native QR code readers, making the process much smoother.

Now, an average of 11 million US households will scan a QR code every year. QR codes are making a come back.

So, how can you leverage the power of QR codes? Here are a few ways.

Here’s an eyecatching way to use a QR code in an ad by Burger King at the VMAs. The QR code was included in a video ad several times and took users to link to download the burger king app. (I highly recommend watching the full video; it’s incredibly clever!) 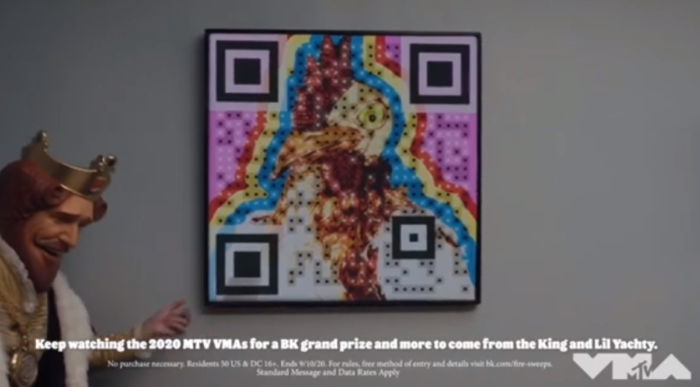 Here’s a creative and interesting thought – what if you combined greeting cards with playlists? It’s the new generation of the mixtape, and the QR images, as they’re called, were developed by the same U.K. agency that did the aforementioned unofficial ads for Instagram and Angry Birds.

If the user has the premium Spotify app on their phone, they can scan the barcode and instantly start the playlist. Music in the playlists spans nearly every interest and occasion, including music for geeks, music for cooks, and everyone’s mixtape favorite – love songs.

When was the last time you went to a museum? If you responded “on a grade school field trip” or “only old folks go to museums,” you’re in for a treat.

Sukiennice Museum in Poland has added a whole new dimension to their paintings to turn each one into a series of stories about insanity, intrigue, deception, war, and much more.

Sukiennice Museum brought reenactors to tell the “Secrets Behind the Paintings.” Visitors scan the QR code for a particular painting and get the inside scoop direct from the “painter” themselves.

4. Get Festive with Personalized Gift Messages and Wrapping Paper

You can’t help but admire the clever ways marketers have attracted holiday shoppers using QR codes. For example, JC Penney released “Santa Tags,” which would let the gift giver record a personalized message that would be played when the recipient scanned the QR code:

5. QR Codes Share Your Life in a Single Graphic

While we’ve yet to see any QR codes on tombstones, they can be used to check-in at the funeral (much like Foursquare) and notify the family who was in attendance. They can also be used to provide families with directions to the funeral.

Currently, most of the older generation doesn’t exactly know what they are, but once they’re told about how the QR codes (or Remembrance Codes as they’re called in the industry) work, they’re amazed.

Who else thinks that names and dates will be eclipsed by QR codes that share a story about a loved one’s life in the future?

How to Get Your Own QR Code

An example of a stylized QR code by Custom QR Codes

The fastest way to get a QR code (for free) is over at QR Stuff. For a small fee, you can also get scan analytics.

If you’re looking for something a bit more stylish, RCode Monkey designs codes in much the same way as a logo by allowing you to choose colors, size, and design.

Before you jump on this new trend, be aware that there are some potential issues with QR codes.

Spammers are now using QR codes as a way to flood smartphones with their gunk (you knew this was coming, right?) Savvy hackers and scammers can use them to disguise malware downloads and force your phone to send premium text messages non-stop at $1 each. Because some QR code scanners will let you use shortened URLs, there’s no telling where those URLs could point to.

That’s why, like with your computer, it’s important to know how your QR scanner works, what’s being downloaded, and whether or not you trust the source.

Not Everyone Has A QR Reader

QR codes aren’t always the best way to interact with your audience. Some people might not know how to use a QR code or might not take the extra step to pull out their phone to read it. And, believe it or not, some people still don’t have a smartphone!

QR codes take users to one specific URL — and that is it. Depending on the reason for using a QR code, it might be more beneficial to direct them to your website where you have a live chat function or encourage them to like your Facebook page so you can continue the conversation.

How to Use QR Codes For Your Business

So how can you take advantage of this growing trend for your business? Keep in mind that much more than web addresses can be scanned.

For example, you use QR codes to:

Have you used a QR code yourself in a promotion? What sort of results did you get? Share your thoughts and ideas in the comments below!